How Screenwriters Can Successfully Use Voice-over & Narration 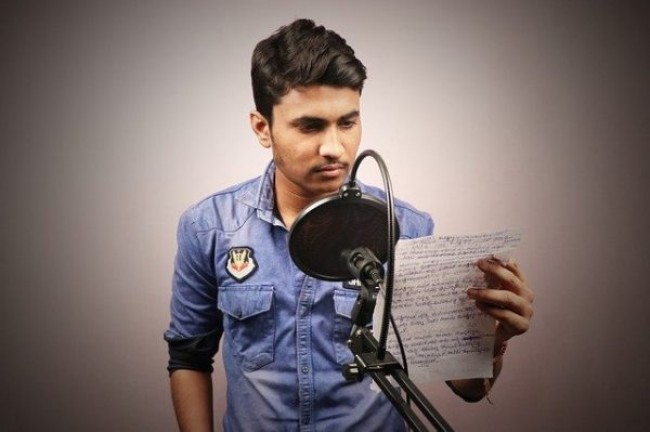 Voice-over gets a bad rap. To the point of being derided as kryptonite to your screenplay. Use it at your own risk!

One of the most exhausted pieces of advice to be spread in Intro to Screenwriting classes everywhere is to never, ever use voice-over — so help you, god.

Of course, this is mostly rubbish, as many screenwriting decrees are. Yet there’s a reason why the technique leaves a bad taste in the mouth of so many readers. Too many times they’ve seen writers lean on voice-over as a crutch to explain their story instead of showing it. Voiceover should not be used for excessive exposition. It’s the misuse of the technique that causes readers to pop the caps off their red markers and label you as a sloppy writer.

There’s no reason your character should be describing or replacing action lines with dialogue lines. Remember that other cliché chiseled into writing law: show, don’t tell.

Considering this reputation, it’s best to approach the voiceover technique with awareness and thoughtfulness. Is this really the best way to express your story?

Voice-over is essentially dialogue from an unseen, but not necessarily unknown, character that is detached from the main action on-screen. Its main function is to enhance the story by temporarily taking the reader out of your story to highlight a plot point or character moment. Successful voice-overs work by revealing a character’s true inner thoughts that either contradict or reinforce how they behave and speak on screen.

Voice-overs can be a great addition to a screenplay like good seasoning in a meal. Sprinkle too much in and the taste can be overbearing. Too little, too bland, or even misplaced. The spice should add just the right amount of kick and relish to your main course.

The way to do that, or anything in writing for that matter, is with intention and thoughtfulness. It’s one thing to accidentally break a window while playing catch with a friend. It’s another thing to smash that window in with your fist.

Intention can be established by considering the function and source of the voice-over.

There are two primary types of voice-overs that are found in scripts: narration and technical voice-overs. Let’s take a look at both.

A character tells a story. Simple, right? Nothing about screenwriting is ever that easy.

While voice-overs are typically specific comments about a scene, narrations tend to be broader commentaries about the story as a whole, expressed through a definite point of view. They are either told through the perspective of the main character, or the invisible, omnipotent voice of logic and wisdom that guides the story through its theme and underlying meaning.

In Memento, the main character’s internal monologue helps push the mystery forward and his thoughts are presented in real-time. In Forrest Gump, the protagonist tells his story to a series of strangers on a park bench, while The Sandlot is told from the perspective of an adult reflecting on the best summer of his life.

Who, where, and how they tell their stories is an important factor in weaving the pieces of a narrative into a cohesive whole.

Voice-over is often used to bookend a screenplay at the beginning and the end, and works well to smooth over transitions — especially during scenes that act as a montage or series of shots with little to no dialogue.

Take a look at this example from Forrest Gump: 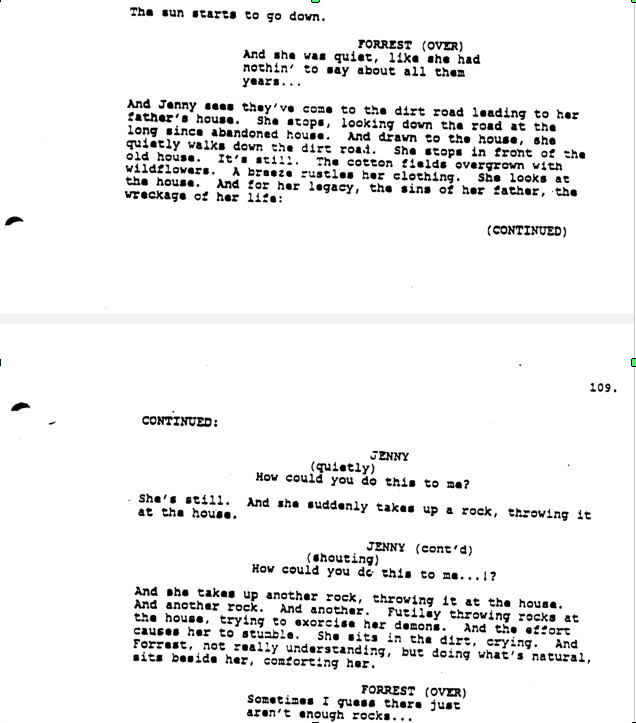 Like Forrest, a character can lead the reader into the scene, and walk them out with an aphorism that strikes at the heart and leaves the reader thinking about it all the way home.

Voice-over narration is also deployed to aid in adaptation. Sometimes the source material needs to shine on-screen and voice-over is a way screenwriters have achieved that.

The pilot for The Haunting of Hill House begins with the opening paragraph of the novel by Shirley Jackson. Fear and Loathing in Las Vegas is full of Hunter S. Thompson’s wild ramblings directly from the novel. When adapting another writer’s work, voice-over provides a way to pay homage to their precise written words.

Considering that a script is not only a story, but a document that speaks to different production departments, voice-over is used in a technical manner to ensure continuity, brevity, and economy of storytelling.

Voice-overs are often recorded in a controlled setting either on set for lower budget productions or during Automatic Dialogue Replacement (ADR) sessions.

In screenplays, voice-overs can be used when a character is silently reading a letter, book, or message.

It’s also used if a character’s voice is heard through some form of technology – say a voice on the phone or over the loudspeaker in a store.

Pre-lap dialogue is when a character’s voice is heard before entering the next scene visually. Here is an example from Episode 308 of Outlander written by Joy Blake: 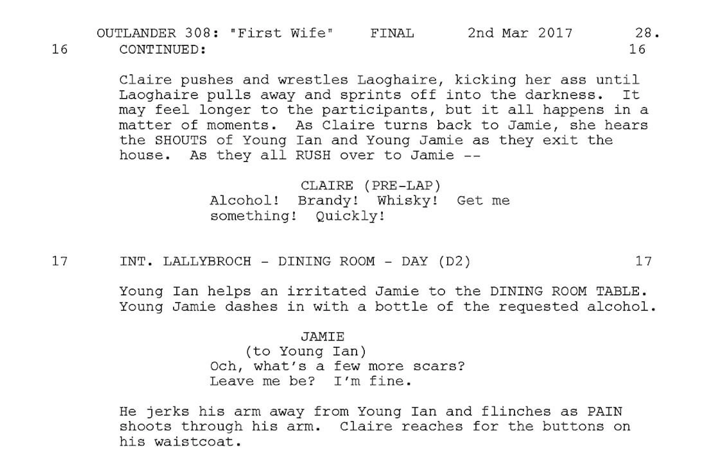 Voice-over also can be applied when characters are speaking over a BLACK SCREEN or OVER BLACK. Many writers often use (PRE-LAP) over black as well.

Off-Screen dialogue (O.S.), or off-camera is used when an active character in a scene speaks, but is not seen. Consider the dialogue that happens through closed doors or when a parent tells their kids who are playing upstairs to wash up for dinner.

Contrary to popular belief, voice-over can help strengthen a screenplay if the story calls for a narrator or for technical reasons. These are the lines that stick with us over the years, the magic shoes that can take us anywhere. 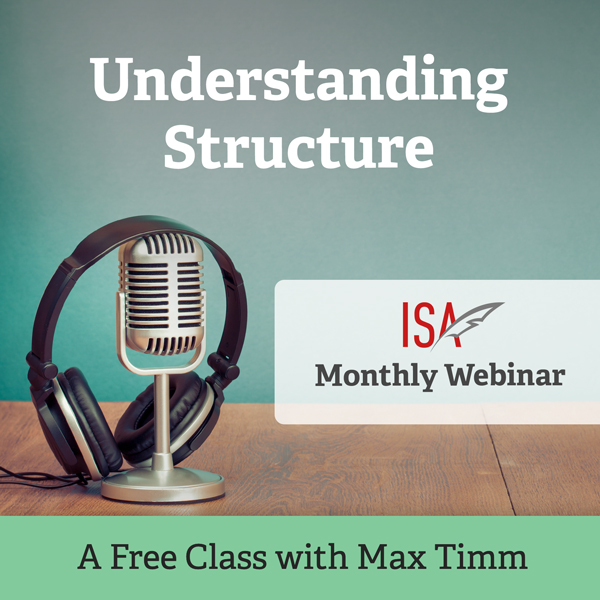 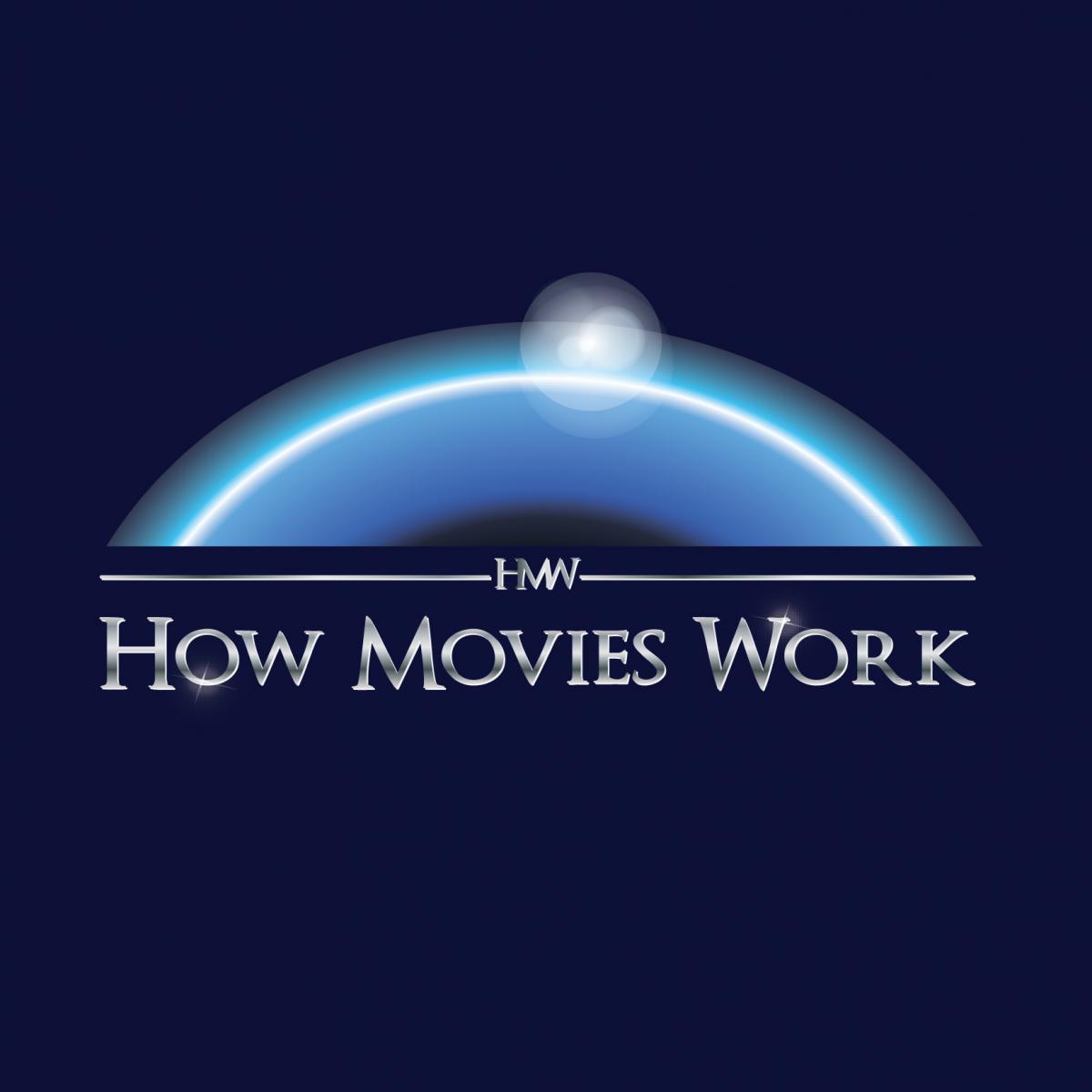