Making films is a curious balance of writing an entertaining screenplay and balancing it with whatever resources are available to bring your vision to the screen. We talk with writer-director of the film Social Animals Theresa Bennett.

Theresa Bennett knew she wanted to make movies early in life. She worked in a movie rental store and started writing film scripts in notebooks. Even though she couldn’t afford screenwriting software, she found a way to create scripts.

Bennett would head to the library and work in the free, 20-minute increments allowed by the library. “I wrote my screenplays really, really fast. I developed these high-speed typing skills,” said Bennett.

When she started working in the industry, she didn’t have to split up time waiting tables or working in video stores, like she did in high school. Instead, she was able to get a job as a transcriber on the show, Kathy Griffin: My Life on the D-List.

“It was my job to watch all of the raw footage, which is actually awesome. I got to see the mechanics of how a show got made,” said Bennett. “I wound up becoming a reality producer and traveled around the country for 8-9 years, talking to people…with different perspectives from me.”

Eventually, this led to the new film, Social Animals. In the movie, a childless, single, broke stoner attempted to salvage her failing business and love life while falling in love with a married man. What could possibly go wrong? The comedy-drama stars Noël Wells (Master of None), Aya Cash (You’re the Worst), Samira Wiley (Orange is the New Black), Carly Chaikin (Mr. Robot), and Josh Radnor (How I Met Your Mother). 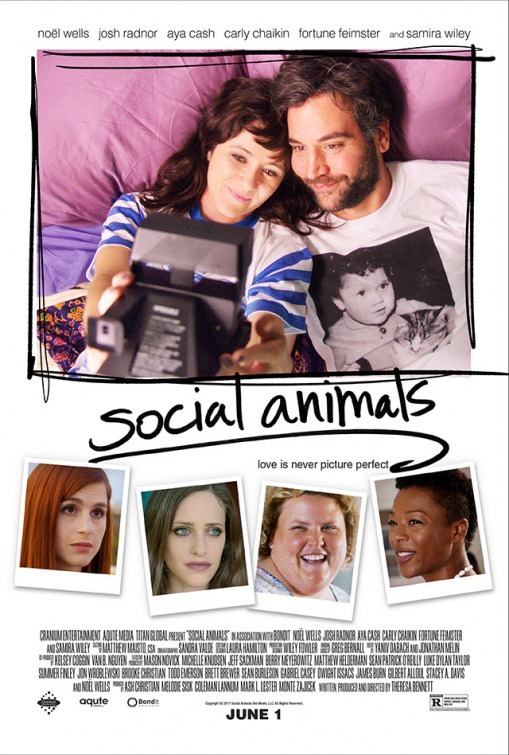 The Benefit Of Limited Resources

For the writer-director, this time on the road re-shaped how she thought about creating characters and helped her put reality into her fiction. “I think that changed the game for me in terms of how I ended up creating a character and how I looked at creating movies. I was painting with a really different palette because of that.”

This new perspective and new toolkit helped her write the film Petunia, which was made into a film in 2012 with help from her friend, director Ash Christian. Bennett co-produced the film, which revolved around a plateaued family who had trouble loving themselves and loving one another.

Thanks to the success of Petunia, Bennett was able to work her way into the director’s chair with her screenplay for Social Animals.

Early Influences In The Creative Process

In a recent move, Bennett found a few hundred notebooks from when she was writing stories by pen and paper. “They’re filled with scripts—ridiculous scripts that nobody should ever read,” joked the creator. “I always really felt my emotions through movies and writing screenplays.”

“It was all about character for me. I just wanted to create these people and watch them live and see how the movies played out. I think that’s the best way to learn what goes into writing a script—just writing terribly and writing all the time,” she added.

“It was never like a hobby for me, it was something I felt like I was supposed to do.”Bennett also recommends reading tons of scripts to learn more about the filmmaking process. “If you see a movie you love, read the script and see how it feels on the page.”

As Bennett found her voice, she was heavily inspired by screenwriter James L. Brooks (As Good as It Gets, Terms of Endearment.) Specifically, Brooks’ movie Broadcast News, which starred William Hurt, Albert Brooks, and Holly Hunter, influenced the screenwriter at an early age.

“I just love his characters. I love the way he tells stories. I think it’s really amazing and really prolific,” she added. Bennett was also inspired by the characters from Amy Heckerling (Fast Times at Ridgemont High, Clueless) and Nicole Holofcener (Enough Said, Friends with Money).

“As far as screenwriters, Carrie Fisher was certainly a favorite. I loved Postcards from the Edge. Mike Nichols (The Graduate, Closer) is the filmmaker. In addition, Bennett also fell in love with darker comedies from the 90s that featured female protagonists. Some examples include Party Girl, Reality Bites, and Don’t Tell Mom the Babysitter’s Dead. All of these examples involve highly original stories. Bennett concludes:

“Try to tell stories that are honest. Don’t cater to the market.

Have your own voice and be original.

That’s what people want. They don’t want a carbon copy”

Creating Characters With A Backbone

“I start each movie by just free writing characters talking,” said Bennet. For Social Animals, she started by creating a conversation between Zoe (Noël Wells) and Claire (Carly Chaikin). “It always starts for me by finding their voice. I’m a big fan of letting the characters drive,” she added. “If you’re true to your characters, your story tells itself.”

After the free writing exercise, the creator goes back and makes sure that plot points happen in the right locations for the movie to work. “You go back and you’re careful to make sure everything is coming at the right place, everything is timed correctly, and the rhythm feels right. But, I do think that character is my main concern,” she said.

To find the voice, she will feel out the film script based on topics or conversations within each scene. Then, she actually writes the story in a linear process. “I definitely use elements of people I know,” she added. For Bennett, most of his friends will see themselves, but they now expect or appreciate the influence on screen.

Everything In Life Is Fair Game

“I think Nora Ephron has said, ‘Everything is a copy.’ I feel like it’s your own experiences. It’s people that you know. It’s crazy stuff you hear while walking down the streets,” she said about her process. “Psychology definitely helps, too. You’re creating people and they have to have their own psyches, their own inadequacies, and their own internal conflicts.”

In terms of hearing things in the street or coming up with an idea away from her computer, Bennett will pull out her phone and email herself ideas for later. “I don’t have a notebook, but I will typically just shoot myself in an email,” she said. Sometimes, she may not like the idea later, but her email inbox can then serve as a search engine for future projects. Sometimes, she will even write full scenes in an email and then visit that message later. This is somewhat like her early days of chipping away at scripts in the library in short intervals. “It sounds really weird or not disciplined, but I just start wherever I am to get the ball rolling,” said Bennett about this approach to her inspiration.

The writer-director has also recommended the book, The Drama of the Gifted Child, which highlights childhood traumas and repressed pain in characters. The book continues to inspired Bennett and was vital for the new film.

Writing A Draft In A 48 Hour Window

Theresa Bennett clearly enjoys creating characters, but there are also obstacles within every screenplay, despite the depth of each personality. “For me, it’s almost like a blackout experience. I tend to see the movie in my head in its entirety. Whenever I have a solid idea for a movie, I could close my eyes and watch it.”

The challenge, of course, is getting that entire idea down on the page in a way that it connects with an audience. It helps for her to be a speed writer, because she can get everything on the page and then really knead the work. “The hardest part is the first day or two,” she added.

In an effort to fill the blank pages, she grinds away at the work for a 48-hour window, which is also true for other screenwriters like Werner Herzog. “Then, once I get over that hurdle, most of my process is rewriting,” added Bennett. During the rewrite, she makes sure everything comes off the way she originally envisioned it.

Then, after she got the script for Social Animals to a shooting point, she rounded up her team and was able to step into the driver’s seat as a first-time director. Not only did she have a supportive team, but she presented her vision in a way that proved she was the best person to make the film.

Outside of mere confidence, she created a Lookbook on Pinterest to help others see her vision. For the writer, this meant showcasing her style and ideas in terms of concept and tone. Basically, the over-preparedness worked for Bennett and put her in the position to be the best person to make the film. “I want to show people that by looking at this image is how I see the scene,” she added about the Lookbook.

This took several years, but she never gave up on the project and never referred to the screenplay as a “writing project.” Instead, she would constantly remind herself, “I will make this movie. It’s not a question of how. It’s a question of when.”