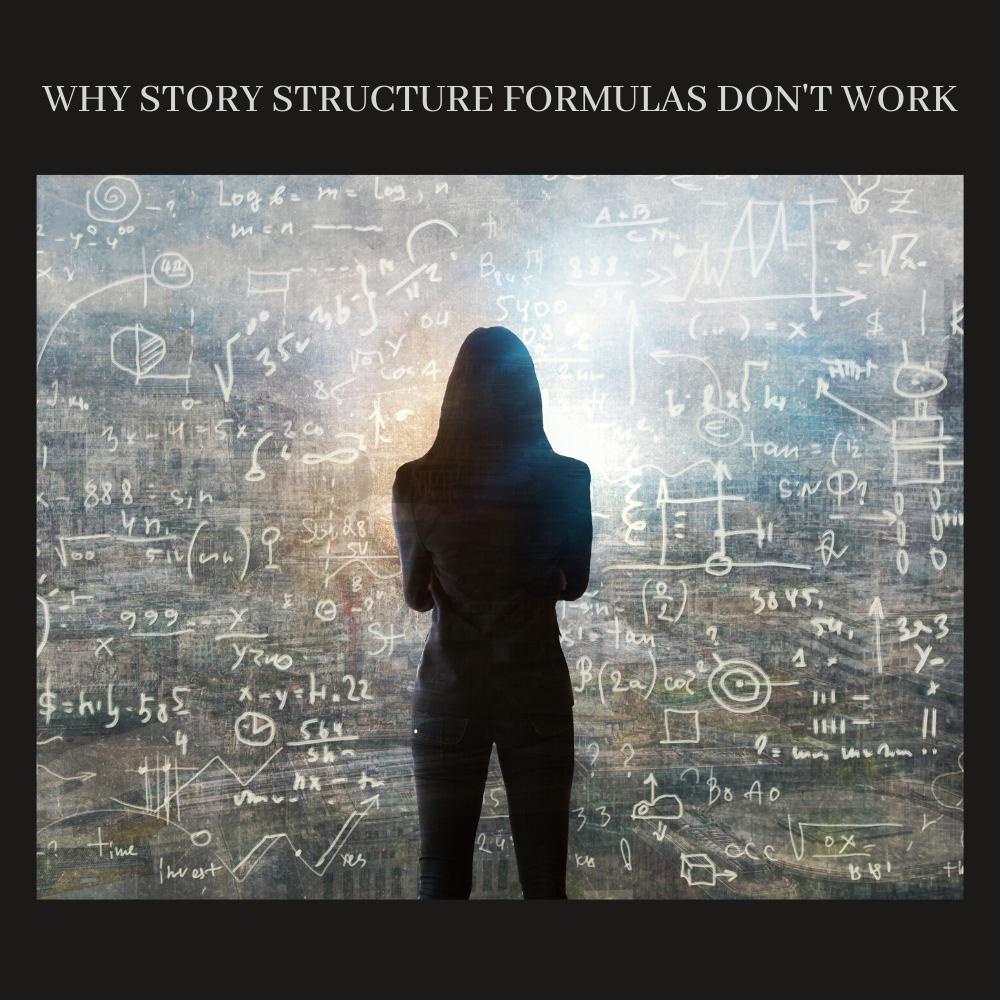 The following is a true story.

I did a script coaching session for someone I’ll call Lisa. Lisa had spent the past four years pursuing her dream of becoming a professional screenwriter. She had written six scripts with nothing to show for it. No agent, no manager, no meetings, no nothing. Lisa was obviously discouraged. Her husband was obviously discouraged. They decided she’d write one last screenplay, and if it didn’t sell, that was it, she would quit. She wrote the script then hired me to help her with it.

Lisa’s script started out great. It had an interesting premise with unique multi-dimensional characters. The dialogue was sharp. It had strong pacing. But then it hit page 17 and started to fall apart. The characters started saying and doing things that didn’t seem consistent with who they were. The plotting felt forced. The more I read, the worse it got. It literally felt like there had been two writers: the one who did such a graceful and masterful job with the first sixteen pages, and the clumsy amateur who took over from there and destroyed the script.

I told Lisa all of this.

She told me she knew the script went bad. She knew it when she wrote it. She could feel it. She said she was going to quit.

I asked her to tell me what happened. What was it like writing the first sixteen pages, and what had happened at page 17?

She told me she was having fun writing the beginning but then she had to create the page 17 inciting incident and couldn’t figure out a way to make it work, to make it feel organic and truthful. She rewrote it a million times and it just kept getting worse. She knew it was terrible but didn’t know what to do about it.

I asked her why she felt she felt so compelled to have an inciting incident on page 17.

She told me a story I hear a lot. When people read her scripts they always compliment her characters and dialogue. This is what she’s good at, what she’s always been good at. But the structure isn’t there. People tell her she needs to learn how to funnel all her good writing into a properly structured script. So she took the seminars. She read the books. She took classes. And they all said the same thing. In order to succeed, a writer needs to write screenplays in the classic three-act structure. Which is as follows:

Start by introducing the characters, world and tone, followed by the inciting incident—also known as the catalyst or call to action the protagonist must answer. This is the event which turns the protagonist’s world upside-down and introduces the crisis they will spend the rest of the movie trying to solve. It is what launches the main story.

In The Wizard of Oz it’s the tornado. This is what propels Dorothy to Oz, turning her life upside-down, thus launching the main story of her quest to find a way home.

The seminars and books tell you that not only do you need a strong inciting incident, it needs to be properly located.

When I was in film school we were told it should come between page 15 and 20 (The Wizard of Oz tornado blows in on page 19). Nowadays, probably due to shorter attention spans, writers are told it needs to come between pages 10 and 17. Lisa had been told page 17.

I asked Lisa to make a list of her all-time favorite movies. She scribbled down titles. I asked her to pick the best structured film from her list. She chose The Godfather. I asked her which of the movies she most wished she had written. She picked When Harry Met Sally. I asked which was closest in tone and feel to her current script and she answered Juno. To round out the genres I asked her to pick a broad comedy. She went with The Hangover. For a big-budget action movie it was The Fugitive.

I asked her what the inciting incidents were in each of these movies.

Lisa said the inciting incident is when Michael Corleone’s father is shot. She’s not alone. This is the most common answer I get. But I would respectfully disagree with it.

Michael is certainly upset to hear his father was almost killed, but it doesn’t throw his life out of balance. It’s not yet a call to action he must answer. Nor does it launch the main story, which is his journey to become head of the family.

It’s only after Michael visits his father in the hospital and ends up thwarting the second assassination attempt that he realizes Sollazo (rival mob boss who ordered the hits) won’t stop until his father is dead. In the next scene Michael concludes the way to keep his father alive is to kill Salazzo and his police captain bodyguard, McClusky.

This is a textbook inciting incident. It’s the call to action Michael must answer. The event that dramatically turns his world upside-down as he’s forced to leave his non-mafia life forever. It’s what launches Michael down the path to becoming godfather.

If I’m right, the inciting incident is on page 62. If Lisa (and others) is right, it happens on page 32. Either way, it sure isn’t anywhere close to page 17.

Five years later, Sally tells her friend that she and her boyfriend have broken up. And Harry tells his friend that his wife left him (page 34). This could be the inciting incident as their lives are (sorta) thrown out of balance, although Harry and Sally aren’t really that distraught about it and there is still no real call to action for either of them.

Then Sally and Harry become friends. This begins the main part of the movie but still doesn’t truly fit the parameters of an inciting incident. Later on Sally discovers her ex-boyfriend is getting married and is thrown for a loop. It’s the first time we see her carefully constructed ‘in control’ demeanor crumble. She calls Harry and he rushes over to comfort her and they end up having sex (page 92), which definitely throws their lives dramatically out of balance. This could certainly be the inciting incident.

Or perhaps part of the movie’s charm is that it doesn’t fit the traditional three act structure model, and so there really isn’t an inciting incident.

The inciting incident is when Juno gets pregnant. This radically upsets the balance of her life and is the call to action she must answer. It happens before the movie starts. Which means there is no inciting incident in the script. Although some people argue it’s when Juno confirms she’s pregnant, which is on page 3. So it’s page 3 or there isn’t one.

The inciting incident is when groomsmen Phil, Stu and Alan lose the groom after a wild night of Vegas bachelor party celebrating. Page 29.

The inciting incident is when Dr. Richard Kimble’s wife is brutally murdered and he’s wrongfully convicted of the heinous crime. This certainly turns his life upside-down and launches the main story. And it occurs before the movie starts, although the first eight pages show us snippets of this in flashback. So either the script has no inciting incident (since the event’s already happened) or it occurs somewhere in the first eight pages.

And it’s not just these movies. You can play this game with any successful movie. If you look through the AFI’s 100 Best Films of all time or the WGA’s 101 Greatest Screenplays, here’s what you’ll find:

So trying to write a screenplay where you believe you have to have an inciting incident occur on page 17—or any specific page—is insane.

And it’s not just the inciting incident. This applies to all the structure and character edicts taught in books and seminars. Professional writers don’t use these formulas because these formulas don’t work. And it’s heartbreaking how many writers don’t realize this and destroy their chances by following what they are told are universal must-follow rules.

Lisa took all this in. She looked pretty upset. She wanted to know why she had wasted so much time torturing herself trying to adhere to the rules if they were in fact bullshit. This is never an easy question to answer so I gave her the Gloria Steinham quote:

“The truth will set you free, but first it will piss you off.”

I’m not sure Lisa appreciated that. She wanted to know why she had been told over and over she had to hit certain plot points by certain pages when this was not true. More importantly, what was she supposed to do about it? Everyone tells her that her scripts lack structure, and so if the story structure paradigms weren’t going to help her solve this problem, what would?
Orginal Article Published: Corey Mandell
«Previous Post Next Post»
Corey Mandell
Corey Mandell is an award-winning playwright and screenwriter who has written projects for Ridley Scott, Wolfgang Petersen, Harrison Ford, Julia Roberts, John Travolta, Meg Ryan, Julia Roberts, Warner Brothers, Universal, 20th Century Fox, Fox 2000, Fox Family, Working Title, Paramount, Live Planet, Beacon Films, Touchstone, Trilogy, Radiant, Kopelson Entertainment and Walt Disney Pictures.   Corey is a distinguished instructor at UCLA, where he earned his MFA.  His students have gone on to sell or option scripts to Warner Brothers, Paramount  Sony Pictures, Disney,...
MORE BY AUTHOR: Classes