Single Mother By Choice: How a Husband and Wife Team Captured a Real Pregnancy on Film During a Pandemic

Selina Ringel and Dan Levy Dagerman, the husband and wife team behind HBO Max’s Single Mother By Choice found themselves in a bit of a predicament in March 2020: Scrap the movie they were already a third of the way through filming, or rewrite the script to accommodate for the pandemic. Because the premise of the movie revolved around Ringel’s real-life pregnancy, there was no time to wait.

“We had a ticking time bomb,” Ringel told MovieMaker. “So we’re like, well, we either make this movie the way we intended, which includes my pregnancy, or it’s a different movie.”

They also had to get creative with their camerawork, considering they no longer had a cameraman. Dagerman, the director, and Ringel, the star, let go of their entire crew and decided to just make the movie themselves.

To do it, Dagerman learned from their cinematography team about how to use a Blackmagic Pocket Cinema Camera 6K on the fly. And just like that, they began rewriting the script and shooting sections of the movie as they went along, documenting Ringel’s pregnancy every step of the way.

“I always trusted my key collaborators as they’re the experts, and I will always continue to do that, because working in one field and specializing is the beauty of film. Networking with all those crews to make the best thing you can makes it better. But at the same time, the ease of use of the camera really like allowed me to break through those layers of intimidation and get my hands really dirty,” Dagerman said. “That’s how we were able to make this movie. I had a wireless follow focus and I was operating handheld, and at the beginning it felt very dyslexic, pulling focus and stuff. It was such an interesting experience as a filmmaker.” 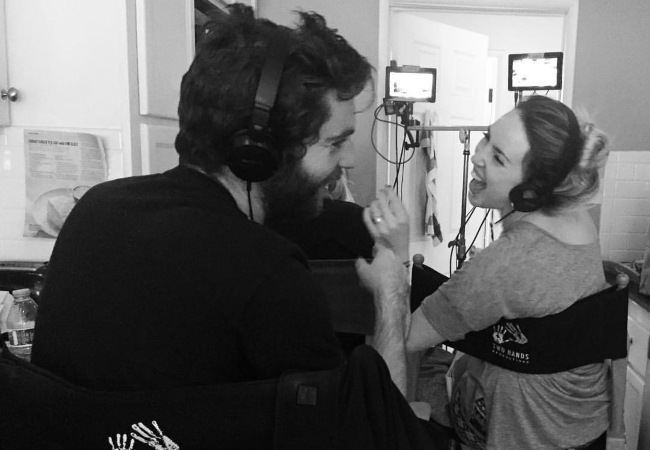 Another way they adapted the movie to pandemic times was by incorporating Zoom and FaceTime calls.

“That moment in time felt like a lot of FaceTime calls and zoom calls,” Selina Ringel added. “There was a point where we’re like, ‘Oh, no, is this going to be the Zoom movie?’…But then, on the other hand, we were like, actually, this is what it feels like to be alive right now. I haven’t had a human interaction in a really long time.”

Single Mother by Choice is a rare example of a genre called docu-fiction — it combines reality or documentary-style filmmaking with fictional elements. Yes, those were real ultrasound appointments Ringel was attending in the film — but they hired an actress to re-record the lines that the technician spoke after the fact. That was real footage of Black Lives Matter protests happening in Hollywood after the death of George Floyd in 2020. That was also real footage of Ringel in the hospital preparing to give birth. But, in real life, she’s not a single mother like her character — her husband was just behind the camera.

Because Dan Levy Dagerman shot the movie in Blackmagic RAW at 6K resolution, editing and color grading the film became much easier in post-production. Colorist Loren White, who graded the project in DaVinci Resolve Studio, said it gave him more flexibility with lighting.

“Since a lot of the film was shot using available light in front of laptops or against white walls, we did what we could to add shape to the images,” White said. “We used offsetting colors in the shadows and highlights, along with vignettes, gradients, and some film grain. I feel like we were able to elevate the look above what we had naturally.”

Single Mother by Choice is now streaming on HBO Max.

The post Single Mother By Choice: How a Husband and Wife Team Captured a Real Pregnancy on Film During a Pandemic appeared first on MovieMaker Magazine.