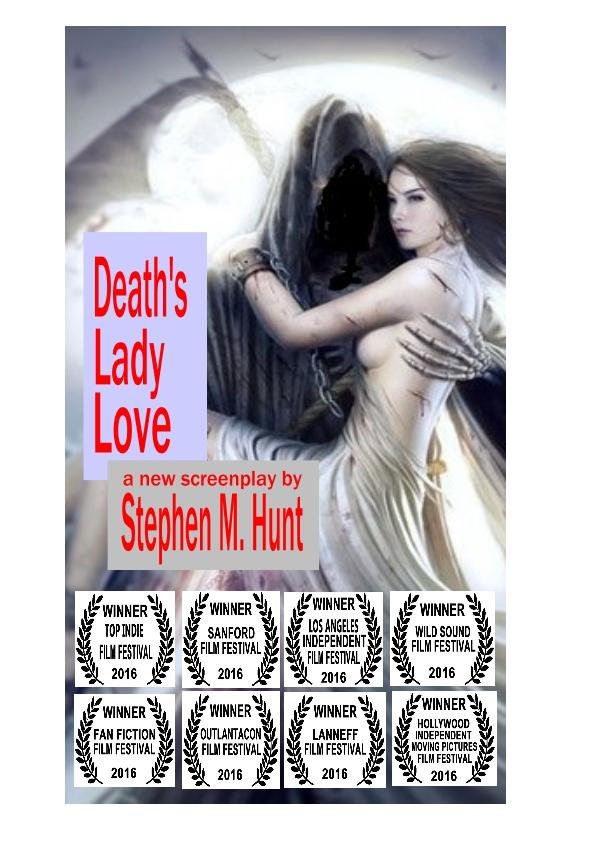 By: Stephen M. Hunt
How many entries into screenplay competitions does it take to get a short screenplay filmed?  Well, in the case of Stephen M. Hunt's short fantasy drama script “Death’s Lady Love”, during 2015/16 Hunt entered it into dozens and dozens of them. It got nowhere frequently but also gradually clocked up eleven finalist placings and on one occasion came second. But during all this it was also accumulating 1st place wins -  it wasn’t until the seventh top prize that a deal was done. “Death’s Lady Love” commences filming this autumn on location in Maine.  There are two morals here. Firstly, just like Hollywood itself, screenplay competition land is fickle, indeed. Secondly, ride those ups and downs and never give up.
More Success

By: Stephen M. Hunt
Last year  a string of 1st place wins made Steve Europe's most successful screenplay contest competitor. Networking from this platform led directly to an invitation to write a short crime-drama for an Emmy Award winning TV director (see Steve's prior posts). After that, veteran BBC writer Peter Mackie invited Steve to co-write  a TV pilot with him. The outcome was "Boss Girl" that went on to win 1st prize in this year's Marquee Lights TV pilot category. "Boss Girl" is now being promoted in London by Peter's agent. So these days, 95% of Steve's energy goes into promoting who he is and what he does. The upshot is he'll probably only finish one new feature script this year being "None Shall Survive" which is a brand new take on the horror/slasher genre.

By: Stephen M. Hunt
After becoming an "official selection" at The Coventry Film Festival UK, Emmy Award winning Miguel Guerreiro's short film of Stephen Hunt's script "Early Release" has now been nominated for "best film" and "best actress". This intense crime / drama will be shown on July 15th with awards the same night.

Concord picked up OVAL PORTRAIT and will be considering it as their third produced film.